In every field of science, one must have to deal with numbers, the numbers can be in any format like the weight of the earth in kilograms is a very large number or mass of an electron is a very small number. The representation of these types of numbers is not easy.

It’s not easy to read or understand that number easily. So there is a way known as a scientific notation that we can use to write very large or small numbers in an easier and understandable way.

In 1998 NASA launched the orbiter to find the data of climate change at mars but after three years the orbiter got lost and investigation on this matter shows that estimate of data was wrong because of two teams transfer their data in different units.  The representation of the number in the standard form is very important because the accuracy of numbers matters, while reading too large or too small number we can make mistake while counting 0’s.

How to express numbers in scientific notation?

The numbers  are written in product from like the first number is mantissa and second is the power of 10 exponents:

For example, if we take any large number of their scientific a notation will be like this way

Here 7 is mantissa  and 21 is exponent. Now we can see that  while reading and writing of these types of numbers the chances of error become reduced and we can easily use these numbers in any paper writing work.

Before using scientific notation let’s find underlying theory. How we can find the different powers for  10?

Here 10 power helps to find the zeros, like when power is 0 there is no zero follow 1, when power is 3 there are 3 zeros follows 1. Like in a similar way 10100 = 1000….0 represent 100 zeros. Which is a very large number and is not easy to read so by scientific notation the representation of very big number become easy.

To express numbers in scientific notation, there should be only one digit remains to the left of the decimal point for this the decimal point move towards the left or right-hand side depending upon the number, either it is greater or less than zero. Multiplying  by the different exponent of  allow us to move the decimal place.

the exponent of 10 is positive it allows decimal to move towards the right. While on the other hand, negative exponent move the decimal towards left

But we keep one the thing in mind in the standard form of scientific notation that we have to left just one digit to the left of the decimal.

More advantage of scientific notation is that we can easily add, subtract, multiply, and divide large numbers. Let’s see how we can use this method to add numbers.

To add or subtract numbers in scientific notation the following steps are uses:

In the similar way we can subtract two quantities.

All numbers in scientific notation have the base 10 so we can easily multiply and divide them:

This website was created to help students and curious people to solve problems with scientific notation. Addition, subtraction, division, multiplication and conversions. 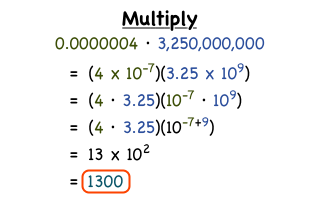